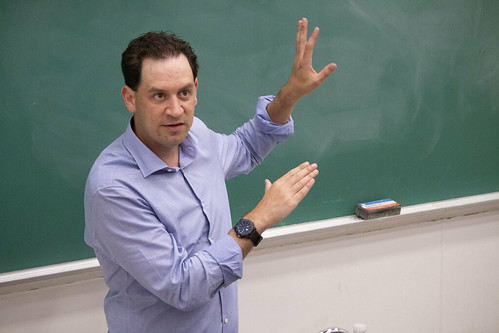 Aaron Cohen is a television writer and producer who has won 24 Emmys and a Peabody Award for his work,
collaborating with some of the biggest names in the sports and entertainment business on documentaries,
studio programs, and live broadcasts, as well as books. In 2016, he was honored with the Sports Business
Journal’s “40 Under 40 Award” – “honoring the next generation of sports leaders.”

Over the last decade, Cohen has emerged as the premiere writer in the sports television space, winning the
Dick Schaap Award for Outstanding Writing at the Sports Emmys six times, for work ranging from HBO’s
critically lauded boxing documentaries to NBC’s Olympic coverage.

Along the way, Cohen has also written and produced some of the most popular and highly acclaimed sports films and programs of recent years,
including writing three Emmy award winning documentaries – “Brooklyn Dodgers: Ghosts of Flatbush”
(HBO, 2007), “Assault in the Ring” (HBO, 2008), and “The Doctor” (NBA TV, 2013).

In live and studio programming, Cohen has worked closely with broadcaster Bob Costas for the past decade-
plus at HBO and NBC, as the head writer of NBC’s primetime coverage of the Olympic Games since 2010.
He was a member of the Peabody-Award winning production team of the 2008 Opening Ceremony at the
Beijing Olympics. Cohen was also a writer and feature producer on Costas’s critically acclaimed HBO series
“On the Record” and “Costas Now.” Cohen also has worked as a writer on various other NBC Sports
telecasts such as Wimbledon, the NHL Winter Classic and Stanley Cup Final, the Triple Crown, U.S. Open,
and the New York City Marathon.

Elsewhere in sports television, Cohen also does work for the Major League Baseball Network and NFL
Network as a writer on various series and specials, and back at ESPN, has been a writer and producer on the
ESPY Awards, most notably as a contributor to the annual “Arthur Ashe Courage Award” presentation. In
2015, Cohen collaborated with Caitlyn Jenner on her widely lauded acceptance speech on the show, which
was later turned into a Google commercial.

In the print sphere, Cohen collaborated with Michael D. Eisner, the former CEO of the Walt Disney
Company, on the book “Working Together: Why Great Partnerships Succeed” (Harper Business, September
2010), an intimate look at successful duos in the business world and beyond such as Warren Buffett and
Charlie Munger, Bill and Melinda Gates, Brian Grazer and Ron Howard, and Joe Torre and Don Zimmer.

Cohen previously assisted Eisner with his memoir “Camp” (Warner Books, 2005). He also collaborated with
the basketball star and ESPN personality Jalen Rose on his best-selling memoir, “Got to Give the People
What They Want” (Crown, 2015).

Cohen graduated from Harvard University in 2000, where he was an executive at The Harvard Crimson and
a sportscaster for the school’s radio station WHRB. He lives in New York City with his wife Miriam, an
attorney and director of human resources at Uncommon Schools, a charter school management organization,
and their daughters Sabrina and Lyla.

Check out a day with our #NSLCBUSI students! They visited a super fun company called Huge in Brooklyn…

Tonight our #NSLCTHTR students celebrated their hard work with their Tonie Awards! Click any photo to view more.…